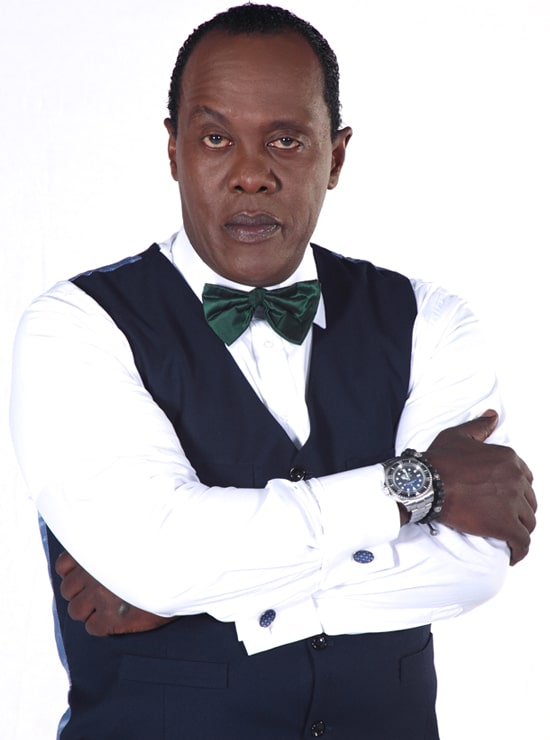 Mostly known as a journalist, broadcaster and television news anchor. Jeff is also a great negotiator, a skilled motivator, excellent showman and gifted presenter. Most people try to fit Jeff into molds but rarely succeed in capturing his essence. Jeff’s genius for reporting and keen understanding of his subject’s overshadow all his flaws, making him one of the most successful reporter’s to originate from Africa. Jeff makes interviewing look effortless but the subject is always treated with integrity and credibility. He is the First Black African journalist to be prominently featured on international network television and at CNN, Jeff cemented his reputation as one of the most accomplished journalists of our time. Perseverance is the hallmark of Jeff Koinange’s career, impartiality and level- headedness is what makes the audience truly… Sit back! … through many memorable interviews to his jaunty refrain All Kenyan! All the Time!

Jeff is also a keen and energetic Master of Ceremonies and has hosted numerous Bilateral and Multilateral events for the African Development Bank (AfDB), the World Health Organization (WHO), The United Nation’s Industrial Development Organization (UNIDO), The Economic Commission of Africa (ECA), the East African Community (EAC), the African Union (AU) and various United Nations (UN) Organization agencies. Jeff’s consummate skills have been recognized internationally with numerous awards. He is the First African to win an Emmy/ First African to win a Peabody Vernon Jarrett, Prix Bayeux etc.
Jeff holds a Bachelor of Arts degree in Broadcast Journalism from New York University.
Positions Held
Chief Anchor, Africa for Arise Television Ltd based in Johannesburg and responsible for covering the entire continent. Arise Television is the continent’s first Africa-owned, Africa-run News Channel focusing on Africa, African Americans and the African Diaspora. (www.arise.tv)
Chief Anchor/Correspondent/Talk Show Host K24 Television, Kenya’s first ever 24-hour All-news TV station which he birthed in November 2007. Five years on- air, the station K24 was awarded various honors including a CNN/Multichoice African Journalist of the Year, two prestigious awards from the Martin Luther King Foundation- one for the station and one for the talk show, Capital Talk, a talk show hosted by Jeff was voted the ‘Best Talk Show’ and Jeff the ‘Best Talk Show Host’ in the country in 2010, 2011 at the Kalasha Film and Television Awards.
CNN’s Senior Africa Correspondent for six years, responsible for reporting from across the African continent. Since joining CNN in 2001, he covered a wide range of African issues and events with a dedication and professional impartiality while using his experience to report on topics sympathetically.
Reuters Television from 1995 to 2001, covering the majority of the African continent from bases in Nairobi, Abidjan and Johannesburg.
Exclusives
Jeff’s reportage has impacted major events from all across the African continent and led to action. His reflection of life on the continent to CNN’s global audience is unprecedented. Although Jeff was CNN’s Africa Correspondent, his journalistic reach was as influential beyond continent. In 2005, he was part of CNN’s Peabody Award winning team that covered the devastation wreaked on New Orleans by Hurricane Katrina.
The violent civil war that led to the overthrow of Charles Taylor in Liberia- he secured an exclusive interview with the outgoing president
The subsequent inauguration of Ellen Johnson-Sirleaf in Liberia as Africa’s first female-elected president,
The arrest and deportation of Charles Taylor.
The state of Sudan and the crisis in Darfur with Anderson Cooper
Uganda on the refugees of Sudan’s Lords Resistance Army.
Nigeria extensively, its politics, its economy and its people and traveled extensively to numerous Mali etc.
Bukavu
Mozambique-baby born in tree
Niger delta
Nigerian Tycoon, Aliko Dangote-cement empire
Hurricane Katrina.
Reports from Baghdad on the post-war insurgency, reconstruction and the historic elections in Iraq in 2005.
Significant events
USA President, George W Bush’s Africa tour, the first by a sitting US Republican President;
The ten-year anniversary of the Genocide that killed up to a million people in a hundred days of savage slaughter in Rwanda;
Africa’s preparation and anticipation of the FIFA World Cup’s debut on the African continent in 2010;
Elections and politics in Zimbabwe, Congo, Sierra Leone and Somalia
Troop deployments in the War on Terror in Djibouti on the Horn of Africa;
The attempted coup and evacuation of French and American civilians in the Ivory Coast as well as the ensuing peace talks;
The World Summit on Sustainable Development in South Africa.
Awards
2005 Television EMMY for coverage of the devastating famine in the West African nation of Niger.
The Primetime Emmy Award is a symbol of peer recognition from over 16,000 Television Academy members. An Emmy Award, or simply Emmy, recognizes excellence in the television industry.
Academy Award (for film), Tony Award (for theatre),Grammy Award (for music)
2006 George Foster PEABODY award for his coverage of the devastating effects of Hurricane Katrina.
The George Foster Peabody Award (Peabody Award) recognizes distinguished and meritorious public service by radio and television stations, networks, producing organizations and individuals. Reflecting excellence in quality, rather than popularity or commercial success, the Peabody is awarded to about 25–35 winners annually from more than 1,000 entries.
The Peabody Awards judging process is unusually rigorous. Each entry is evaluated on the achievement of standards it establishes within its own contexts. Because submissions are accepted from a wide variety of sources and styles, judges seek “Excellence On Its Own Terms.”
2006 Vernon Jarrett Bronze Medal for ‘Best Feature’ on ‘Mass Rapes in the Congo’
The Vernon Jarrett Institute awards the medal, for journalistic excellence, annually to exceptional journalists. It honor’s outstanding coverage of people of African descent and the issues that impact their lives. The award is intended to promote greater diversity in the coverage of domestic and foreign news by media organizations in the United States.
2006 The Prix Bayeaux for War Correspondents for reporting on the civil war in the Congo.
Since I994, the city of Bayeux, associated with Calvados General Council organizes this award to pay tribute to journalists who are working in hazardous conditions to allow access to free information.
2006 Finalist of the Diageo Awards for Business Reporting in Africa.
2007 Finalist of the Diageo Awards for Business Reporting in Africa.
2007 Vernon Jarrett Bronze Medal and ‘Famine in Malawi’
2008 The Moran of The Burning Spear (MBS)
The highest honor accorded a Kenyan civilian by the President for contribution to journalism in Kenya, Africa and internationally.